The annual exodus from Bihar to places like Mukherjee Nagar and Old Rajinder Nagar in Delhi and Rajasthan’s Kota was one of the reasons LJP chief Chirag Paswan included a promise to create similar coaching hubs in Bihar in his manifesto. 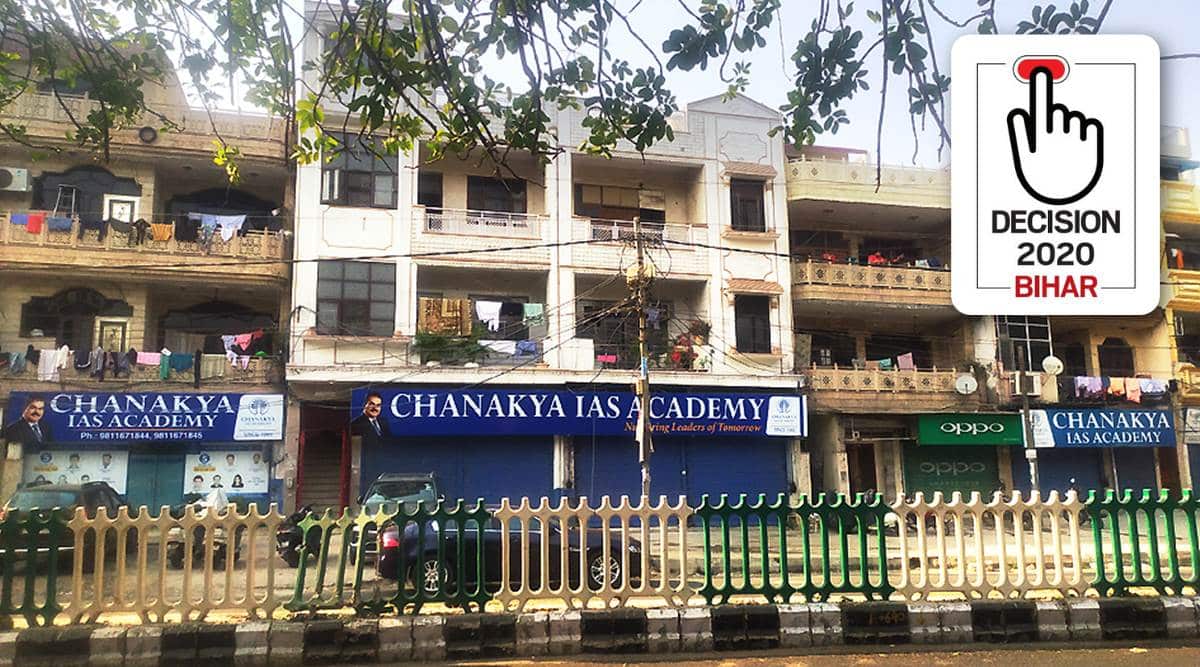 Last week, while campaigning in Bhagalpur, Chief Minister Nitish Kumar made a quick halt at the house of a friend, to meet the latter’s mother and brother Rajiv Kant Mishra, 60.

Mishra talks about how he grew up among politics, with his father a friend of ex-CM Bhagwat Jha Azad (cricketer-politician Kirti Azad’s father), and elder brother Uday Kant Mishra a co-traveller of Nitish from the ’70s J P Movement.

In 1981, Rajiv Kant had come to study at Delhi University’s Campus Law Faculty, while preparing for the civil services, staying at the coaching hub of Mukherjee Nagar. After failing to clear the UPSC exam, he had returned home to Bhagalpur and, in 2000, started J S Education. Bihar produces “talented, hard-working” but “shy, under-confident students”, Mishra says, adding that he started the institute to train youths in “personality development”.

The annual exodus from Bihar to places like Mukherjee Nagar and Old Rajinder Nagar in Delhi and Rajasthan’s Kota was one of the reasons LJP chief Chirag Paswan included a promise to create similar coaching hubs in Bihar in his manifesto.

Since the lockdown, the coaching centres are desolate, with the Delhi government not allowing physical classes.

With such hubs full of students and teachers from Bihar, special trains were run from Kota to the state during the lockdown, points out Vishal Gaurav, 40, who runs a school in Darbhanga. “A teacher at a Patna coaching centre might get paid Rs 20 lakh, but gets offered Rs 60 lakh in Delhi, Kota. Why won’t they go?” he adds.

Pranay Aggarwal, who runs ‘IAS Gurukul’ at Karol Bagh in Delhi, claims to have had 500-plus online enrolments this year; 11 of his students from Bihar cleared the civil services exam this year. He teaches the “optional” sociology paper, charging Rs 45,000-Rs 50,000 annually; the fees for General Studies paper can go up to Rs 2 lakh. What drives the rush is the desire for government jobs, and the stability and proximity to power it provides, Aggarwal says.

Another factor are success stories like that of Mukund Kumar, a farmer’s son from Madhubani, who secured rank 54 on his first attempt this year. Chandan Prabhakar, the District Programme Officer (Education), who too stayed at Mukherjee Nagar to prepare for the IAS, and finally made it through the Bihar Public Service Commission, gives his example.

Ujjwal Raj, 25, who teaches commerce at Bhagalpur coaching centre Satyam Wave, points out that far from providing job opportunities to youths, Bihar even fails to ensure that they complete their three-year graduation on time. It took him almost five years. This is why he pursued history at Banaras Hindu University and headed to Delhi in 2014 to prepare for the IAS, Amrit Kumar, 29, of Gopalganj, says.

One of the promises made by the RJD this time is that a Mahagathbandhan government would ensure that undergraduate degrees are completed on time.

According to Aggarwal, apart from starting from this disadvantage, students from Bihar are up against a language barrier. He says this even reflects in the coaching hubs — “In Old Rajinder Nagar, English-medium coaching happens, while Hindi-medium aspirants go to Mukherjee Nagar. The latter also has centres for bank exams, SSC, etc.” On paper, the UPSC doesn’t discriminate but, according to him, vernacular students — like Amrit Kumar — struggle, especially since the introduction of an aptitude test.

Mishra sees the fact that students travel from Sahibganj, Munger, Naugachia to Bhagalpur for coaching as a sign of growing aspirations. “People may call Nitish ‘paltu bhai’ (a turncoat), but to get Bihar from negative to positive is very difficult. Even orthodox Muslim families send their girls to coaching,” he says.

The state still has a long way to go, Gaurav cautions. “Ghode ko kuen tak lekar jaoge, pehle dekho kuen mein paani hai bhi ki nahin (You can lead a horse to a well, but please see if the well even has water).”

A 26-year-old, who moved back to Ara from Mukherjee Nagar during the lockdown and takes classes for the IAS exam there now, says that as the young leave, Bihar may remain caught up in the past. Not wanting to identify herself, she adds, the privileged “move out for better opportunities, leaving behind a voter base whose priorities have not moved beyond sadak-paani-bijli (roads, drinking water, and electricity)”.