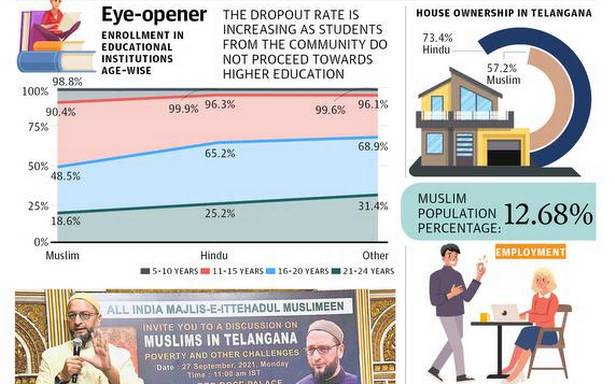 Hyderabad parliamentarian Asaduddin Owaisi on Monday quoted data on socio-economic conditions of Muslims in Telangana, put forward by academics, to buttress his demand for a roll-out of a Dalit Bandhu-like scheme for at least 1% of Muslims who are living in abject poverty.

Mr Owaisi was speaking at a discussion on Muslims in Telangana – Poverty and Other Challenges, jointly organised by the All India Majlis-e-Ittehadul Muslimeen and the Centre for Development Policy and Practice, where experts said that the number of Muslims living in abject poverty is increasing, while the number of those from other communities is decreasing.

The AIMIM president said that it is his opinion that the government should extend ₹10 lakh to 2% Muslims living in abject poverty – 18,000 households – in the State, and in case the financial burden is high, then at least 1% – translating into 9,000 households – be covered. He also suggested that the financial assistance be disbursed in two equal instalments.

“I promise you that our MLAs from Telangana will demand this (₹10 lakh for Muslims) based on the data when a discussion, God willing, happens,” Mr Owaisi said, adding that the data presented during the discussion would be eye-opening, and counter stereotyping of the community. “Muslim appeasement never happened, and nobody will do it. We want to show them: this is the data, this is where we are weak, you do us justice,” he said. Mr Owaisi said that while the literacy rate of Muslims in Telangana is 77%, that of the State is 67%. The dropout rate increases as students from the community do not proceed towards higher education. This, he said, is due to the fact that Muslims did not have financial wherewithal.

Development economist Prof Amir Ullah Khan from CDPP said that according to Prof Amitabh Kundu, new data indicates that discrimination against Muslims in the country has increased two-fold and post-COVID-19, the participation in the salaried workforce has halved. He also said that migration of Muslims to urban areas too has dropped over the past few years.

Prof Khan said that helping to create an asset for beneficiaries is the most efficient anti-poverty intervention. “If you give a Dalit household an asset or give ownership of something such as a small land parcel, a small house, this is a most efficient anti-poverty intervention. He can acquire an asset with ₹10 lakh. If you give this to 18,000 (Muslim) households, you will spend ₹1,800 crore, which is only 1.5% of the Telangana annual budget,” he said, adding that unspent funds allotted for minorities welfare over the past four years too could be used.