Even though the sculpture — a nude female figure — by artist Maggi Hambling has come under immense flak for its objectification of the female form, the tribute to Wollstonecraft has been long overdue. 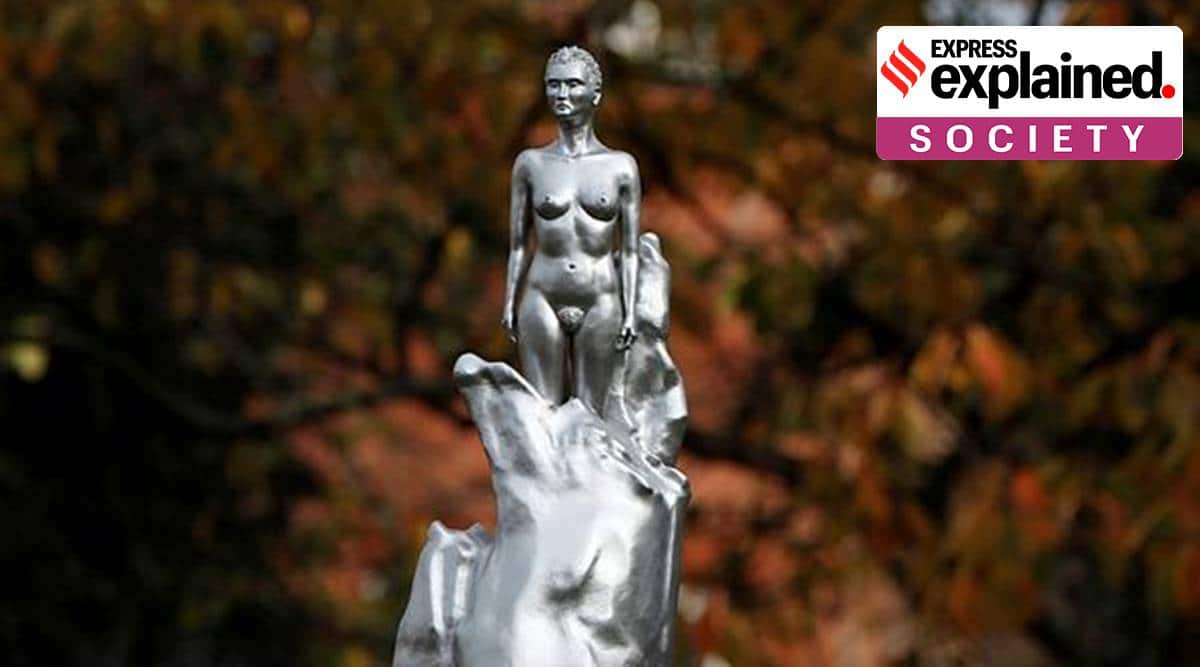 After a decade-long campaign, on Tuesday, Mary Wollstonecraft, the 18th-century British feminist writer and philosopher often regarded as the “mother of feminism”, was honoured with a memorial statue at Newington Green in north London, where she spent a considerable part of her life.

Even though the sculpture — a nude female figure — by artist Maggi Hambling has come under immense flak for its objectification of the female form, the tribute to Wollstonecraft has been long overdue.

Mary Wollstonecraft is best known as the writer of the pathbreaking ‘A Vindication of the Rights of Women’ (1792), an early treatise on gender equality. But in her brief, unconventional life, Wollstonecraft’s road to acclaim was far from smooth.

Born in April 1759 in a prosperous household, Wollstonecraft was the second of seven children. Her father, Edward John Wollstonecraft, was a speculator and a dipsomaniac, squandering away the family income and turning increasingly abusive towards his wife and children.

As a child, the first place Wollstonecraft would face discrimination was at home — while her older brother received extensive formal education, her sisters and she were only afforded day schools for a few years. Nonetheless, she continued to read and write on her own, spurred by her curiosity and the necessity of economic independence, following the slump in her family’s fortunes.

Wollstonecraft’s desire to learn was fuelled by two definitive friendships in her early life — with Jane Arden, the daughter of a philosopher, and with Frances Blood, who would go on to become an illustrator and educator. The women read together and attended lectures and, after a brief stint as a lady’s companion, Wollstonecraft even opened a girls’s school with her two sisters and Blood in 1784, when she was about 25 years old. Even though the endeavour would come to an end after Blood’s untimely death during childbirth, these were some of the most intellectually stimulating years for Wollstonecraft.

Also in Explained | In Enola Holmes, a glimpse of the women’s movement of 19th century England

A chance meeting with political reformer Richard Price would be the beginning of another friendship that nourished her intellectually. Through Price, Wollstonecraft would meet the future American President Thomas Jefferson and American polymath Benjamin Franklin, among others. These friendships would broaden her horizons and stimulate her interest in contemporary politics and culture.

The death of Blood, to whom Wollstonecraft was deeply attached, would be the trigger for her first book. Following a stint in Ireland as a governess, Wollstonecraft would return to London to write ‘Thoughts on the Education of Daughters’ (1787). It was published by Joseph Johnson, a liberal publisher – and even though it was marketed as a book of conduct for women who wanted to be good wives and mothers, Wollstonecraft advocated compulsory education, and encouragement of critical thought and life skills for economic independence of women.

This would be the beginning of her writing career, an unconventional choice for a woman of the time, but, as Wollstonecraft wrote to her sister, she was happy to become a pathbreaker — “the first of a new genus”. She learned new languages, including French and German, and worked as a translator and reviewer.

Through Johnson, Wollstonecraft’s intellectual circle would come to embrace thinkers such as the poet and essayist Anna Barbauld, the philosopher William Godwin, whom she would later marry, and political activist Thomas Paine.

The egalitarian principles of the French Revolution, which began in May 1789, found favour with Wollstonecraft. When British politician Edmund Burke wrote a critique of the revolution in his ‘Reflections on the Revolution in France’ (1790), Wollstonecraft was quick to come to the revolution’s defence with her ‘A Vindication of the Rights of Men’ (1790), in which she argued that tradition alone cannot guarantee rights; it has to be based on notions of rationality and equality. Paine would join this parley, which came to be known as the Revolution Controversy, with his ‘The Rights of Man’ (1791), in which he backed Wollstonecraft’s contentions.

The French Revolution would also be the spur for her seminal work. In 1792, when she was 33 years old, Wollstonecraft would take forward her argument for equality to gender roles in ‘A Vindication of the Rights of Women’.

“I do not wish them (women) to have power over men; but over themselves”, she wrote, arguing that education was as much a right for women as for men. She made a case for moral and intellectual autonomy for women, who are “taught from their infancy that beauty is woman’s sceptre, the mind shapes itself to the body, and, roaming round its gilt cage, only seeks to adorn its prison”.

Wollstonecraft’s treatise was a response to a report submitted by Charles Maurice Talleyrand-Périgord to the French National Assembly, suggesting that women only be given domestic education. Her treatise was well received at the time, undergoing a change only after her death, with the publication of a memoir by her husband, Godwin, that recorded her unconventional personal life.

Nevertheless, by the early 20th century, the book would come to be considered as one of the earliest feminist texts, foregrounding the centuries’ long struggle against misogyny and inequality.

Wollstonecraft died in 1797, 11 days after the birth of her second child, daughter Mary (who went on to write ‘Frankenstein’), when she was only 38 years old. A year after her death, her bereaved husband Godwin published ‘Memoirs of the Author of a Vindication of the Rights of Women’, as he believed “there does not exist her equal in the world”.

The intimate account of her life — her relationship with the American diplomat and author Gilbert Imlay, with whom she had a daughter out of wedlock, her affairs, the unusual marriage she had with Godwin, and her unconventional views on religion — however, had the contrary impact. It took the focus away from her writing to her personal life. The ensuing rather vicious scrutiny erased the memory of her radical fight for women’s emancipation for nearly a century – until British politician and suffragist Millicent Garrett Fawcett claimed her as one of the early feminist icons of the suffragist movement.

Since then, successive generations of feminists, including writers Virginia Woolf and Emma Goldman, scholars such as Gary Kelly and Virginia Sapiro, have acknowledged Wollstonecraft’s legacy and the continuity of her ideas in successive stages of the movement.