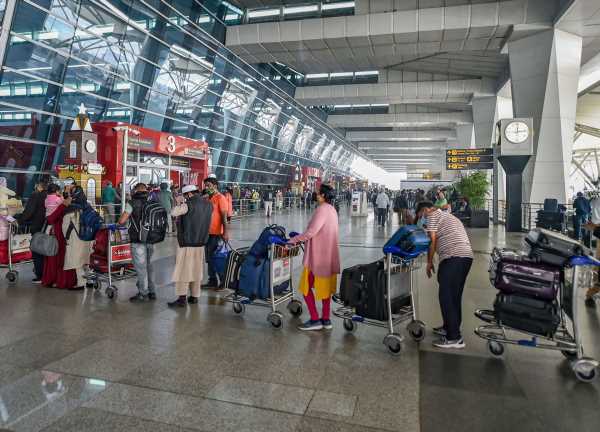 They will replace CISF personnel in a revamp that aims to provide cost-effective, reliable, and professionally competent security service at airports.
Aneesh Phadnis reports.

Around 1,900 private agency guards will take over non-core security roles at over 50 airports in the country.

They will replace Central Industrial Security Force (CISF) personnel in a revamp that aims to provide cost-effective, reliable, and professionally competent security service at airports.

The Bureau of Civil Aviation Security (BCAS), the aviation security regulator, issued a circular in this regard in May, and airports have now begun roping in private guards for non-core functions such as segregation of passengers at departure and arrival gates, access control/document check in security hold areas, access to visitor gallery, and security of vital installations.

The CISF has also removed over 1,100 personnel from airports.

Around 3,000 CISF posts at airports have been abolished following this exercise.

At present, CISF has around 29,000 personnel deployed at 65 airports.

“Private security agencies will have to receive a security clearance and undergo a security programme approved by the BCAS. The agencies will also have to abide by our rules and regulations,” Prasad said.

Hiring of private guards is also expected to lower aviation security costs at airports because their salaries are estimated to be lower than that of CISF personnel.

At present, airports bear the expenses of security cover provided by the CISF and this is recovered from passengers in the form of an aviation security fee.

Airports will be reimbursed for costs related to the deployment of private agency guards, a source said.

At present domestic and international passengers are charged an aviation security fee of Rs 200 and $12, respectively.

“The CISF will continue to be in charge of core areas of security at airports, involving anti-hijack measures and perimeter protection,” a Mumbai International Airport spokesperson said.

Private agency guards have been deployed after elaborate pre-deployment and on-the-job training, the spokesperson added.

“Private security personnel will be under the operational command and control of CISF,” Bangalore International Airport said.

Delhi International Airport said a private security agency had been hired and personnel were under the process of deployment.

The Airport Authority of India is in the process of deploying private security agency personnel at 46 airports.

“Private security guard deployment is expected to start upon receiving security clearance from the BCAS,” the AAI said.

“Work order has been issued to 21 agencies for providing guards at 36 airports, and a tender is under process for the balance 10 airports,” it added.