Telangana, Hyderabad, Andhra Pradesh Coronavirus Live Updates: Telangana added 2,137 new COVID-19 cases, pushing the total infection count to 1,71,306, while the death toll rose to 1,033 with 8 more fatalities. The Greater Hyderabad Municipal Corporation (GHMC) accounted for the most number of fresh cases with 322, followed by Rangareddy (182) and Medchal Malkajgiri (146) districts, it said, providing data as of 8 PM on Saturday.

Andhra Pradesh’s coronavirus tally touched 6.17 lakh on Saturday as the state completed a total of 50.33 lakh sample tests, returning an overall positivity rate of 12.27 per cent. In 24 hours ending 9 am on Saturday, 8,218 fresh cases were reported in the state while 10,820 got cured and discharged. The latest bulletin said 58 more patients succumbed to the pandemic in 24 hours, taking the total toll to 5,302. After a total of 5.30 lakh recoveries, the number of active cases reduced further to 81,763, the bulletin added.

In another news, The nine-day ‘Adhika Masam Brahmotsavam’ held once in three years began at the shrine of Lord Venkateswara at Tirumala, on Saturday. The ‘brahmotsavam‘ began with the hoisting of the ‘Garuda’ flag atop the golden ‘dwajathambham‘ (flag mast) by high priests amid chanting of Vedic hymn amid observing COVID-19 precautionary measures, a temple official said. For the first time in the history of the ancient hill temple, the customary practice of taking out Lord Venkateswara in a grand procession on the ‘vahanas’ (celestial vehicles) around the temple was cancelled to avoid the huge congregation of devotees due to the coronavirus norms, the official said.

Telangana reported 2,137 new COVID-19 cases, taking the total infecction count to 1,71,306 while eight more deaths pushed the toll to 1,033, a government bulletin said on Sunday. The Greater Hyderabad Municipal Corporation (GHMC) accounted for the most number of fresh cases with 322, followed by Rangareddy (182) and Medchal Malkajgiri (146) districts, it said, providing data as of 8 PM on Saturday. The cumulative recovered cases stood at 1,39,700,while 30,573 were presently under treatment across the state. As many as 53,811 samples were tested on September 19, taking the total specimens examined so far to 24,88,220. The samples tested per million population was 67,020, the bulletin said.

On Wednesday evening, a surprise spell of heavy downpour left different parts of the city inundated, crippling the normal life. The highest rainfall of 11 cm was recorded in Bahadurpura, a suburb of the Old city which also houses the city’s famous zoo. A panic alarm was sounded by the zoo authorities late evening as bad weather showed no signs of respite.

Parts of the zoo, especially the 99-acre animal safari park were inundated immediately after the adjoining Mir Alam tank started overflowing. After feeding the animals, birds, and reptiles, the entire staff of over 100 people were pressed into emergency services. Even as they cleared the channels and canals inside the 380-acre zoo to ensure a free flow of water, the animal enclosures and moats were filled with water to the brim, and roads were inundated by Thursday morning. 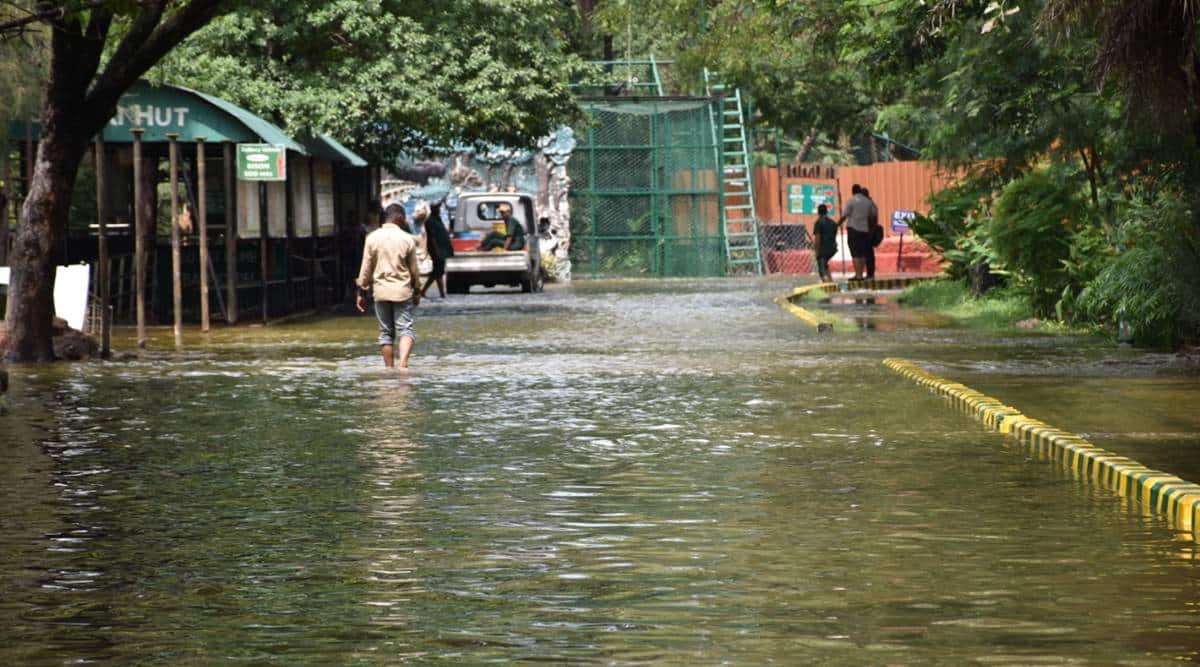 Continuing to register a dip in fresh COVID-19 cases, Andhra Pradesh in the 24 hours ending 9 am on Friday reported 8,096 new infections and 67 fatalities, taking the tally to over six lakh and death toll to 5244. The state registered an increase in recoveries with 11,803 patients recovering. The overall number of coronavirus tests in the state was just short of the 50-lakh mark, at 49.59 lakh, on Friday, turning a positivity rate of 12.29 per cent. While the aggregate cases rose to 6,09,558, recoveries increased to 5,19,891, leaving 84,423 active cases after 5,244 mortalities, the latest bulletin said.

AP reached the 10,000 cases mark on June 24, one lakh on July 27, two lakh on August 7 and 2.50 lakh on August 12. It reached the three-lakh mark on August 18 and four lakh on the 28th. On September 7, the Covid-19 tally went past the five lakh figure. It took 190 days for the state to go from just one case to six lakh cases after the first person tested positive for the contagion on March 12, with the last two lakh coming in just 20 days.

Telangana reported 2,043 new cases along with 11 new fatalities in the last 24 hours, taking the state’s total caseload to over 1.67 lakh cases along with 1,016 total deaths, Telangana’s Covid-19 bulletin said on Friday. Out of the total infections, over 1.35 lakh people have recovered after testing positive while 30,673 infections still persist. Telangana’s recovery rate rose to 81.02% and its case fatalities rate continues to stand at 0.60%.