The man had been on ventilator support for the last eight days and died due to acute respiratory distress syndrome and multi-organ failure. 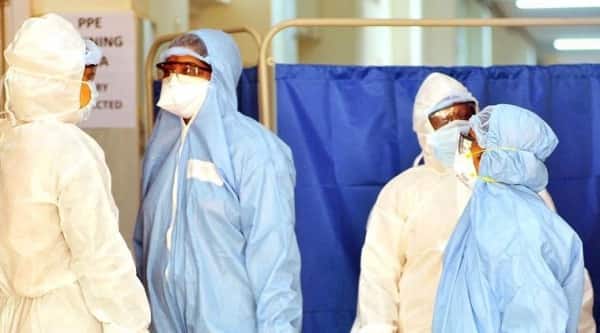 Pune registered its first death due to coronavirus disease (COVID-19) on Monday, when a 52-year-old man who had been on ventilator support for the last eight days at Deenanath Mangeshkar Hospital succumbed to COVID-19-related multi-organ failure.

“World over, people are dying… this is a personal loss for us,” said the man’s brother-in-law, who quietly helped the family complete the formalities at the hospital.

“Something urgently needs to be done,” he added as the body was wrapped as per protocol and covered with a heavy blanket. It was wheeled on a stretcher to the hospital’s basement, where an ambulance was ready to ferry it to Vaikunth crematorium.

There were just a handful of people at the crematorium, as the government has banned the gathering of large number of people at funerals during the lockdown. The man’s wife, daughter, parents and brother-in-law were allowed near the cremation platform for the final farewell.

The 52-year-old man, who worked in Thane, “used to come to Pune over the weekends,” said his brother-in-law.

“He had gone to Naidu Hospital for a check-up on March 20 and we referred him to Deenanath Mangeshkar Hospital since his condition seemed severe,” said Dr. Ramchandra Hankare, Pune Municipal Corporation’s medical chief.

A swab sample taken from the man tested positive on March 22.

Dr. Prasad Rajhans, chief intensivist at Deenanath Mangeshkar Hospital, said the man’s condition deteriorated and he was critical. He had been on ventilator support for the last eight days and died due to acute respiratory distress syndrome and multi-organ failure. He also had underlying medical conditions like diabetes and hypertension, Dr. Rajhans said, adding that the protocol of treatment as advised by the Indian Council of Medical Research was adhered to.

At least 34 of the man’s contacts were traced and their swab samples sent for tests, but they were negative for COVID-19, said PMC health officials.

Dr. Kalpana Baliwant, assistant health officer at PMC, said as per the guidelines of the Ministry of Health and Family Welfare, the man’s body was placed in a leak-proof plastic body bag and wrapped with a sheet provided by family members. “We did not perform an autopsy as it is not allowed as per the guidelines,” said Dr. Baliwant.

While the personnel handling the body followed standard precautions – they wore surgical masks and gloves, among other steps — only a limited number of family members were allowed at the crematorium, Dr. Hankare said. The ambulance driver also took the vehicle for decontamination at the PMT Swargate bus depot.

Three persons had tested positive for COVID-19 in the city late on Sunday, including a man who returned from Bermuda and two relatives of the person who is critical at Sahyadri hospital, said Dr. Sanjeev Wavare, assistant medical officer at PMC.

Currently, there are 31 persons positive with COVID-19 in Pune, of which five are from rural areas. Seven of them have been discharged. Pimpri-Chinchwad has 12 COVID-19 cases.