Shreemant Dagdusheth Halwai Ganpati, one of the most celebrated idols in the city, has been draped with elaborate decorations and ornaments. Located in Budhwar Peth, the temple is visited by thousands of pilgrims every year. 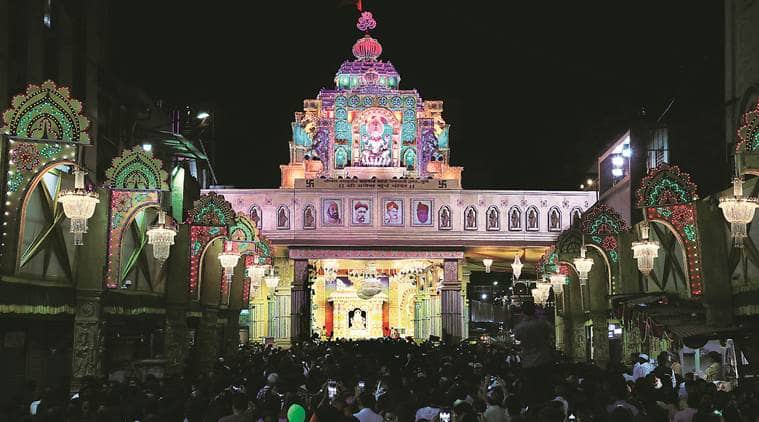 As Ganeshotsav nears its end, pandals of Ganesh mandals are witnessing a sea of devotees lining up on the streets to catch a glimpse of the colourful decorations. Shreemant Dagdusheth Halwai Ganpati, one of the most celebrated idols in the city, has been draped with elaborate decorations and ornaments. Located in Budhwar Peth, the temple is visited by thousands of pilgrims every year.

Speaking about this year’s arrangement, Ulhas Bhat, secretary of the mandal, said, “The preparation…began two months ago. The decoration, handled by Vivek Khatavkar, is worth a crore. The inspiration behind this year’s theme was the Konark Suryamandir. We have tried to emulate the glory and magnificence of the original temple.”

The trust is known for its active initiative and involvement in social work. Talking about the veteran organisation’s contribution to the community, Bhat said, “We share 70 per cent of the monetary donation we receive with the needy. During the festive season, we also undertake several social welfare initiatives.Our trust provided funds for the rehabilitation of misplaced people in the flood-affected areas of Kolhapur and Sangli. We also sent trucks of medicine and groceries. We have also adopted two flood-affected villages. Besides, we are also donating money towards the education of 1,000 underprivileged children. We are giving a part of the vargani (contribution) to the poor.”

Another popular mandal is the Tulshibaug Public Ganesh Mandal, which was founded by Dattatray Shridhar Khatavkar. A popular painter and sculptor known for his craft, his legacy is now being carried forward by his son Vivek Khatavkar and grandsons Vipul and Viraj Khatavkar.

Viraj Khatavkar, speaking about the Dagdusheth Ganpati’s theme, explained that the concept was a combination of sun temples, surya rath and surya murthi. “We studied various mythological stories and historical monuments of our country and depending what best suited our area, we decided to establish a 14-foot fiberglass murti.”

Purva Anand Waikar, the granddaughter of D S Khatavkar, said, “Every year, a particular mythological temple or scene is picked and described in sculpture form. This year’s design is based on Swaminarayan Mandir from Delhi. The basic designs are made in POP (plaster of paris) and fiberglass idols, which were introduced for the first time in India by this mandal.”

“I am a regular visitor of Tulshibaug Ganpati,” said Dinkar Bhagwan Mangade, a devotee. “Each year, there is a different set-up and theme. Last year, it was influenced by Shree Tambdi Jogeshwari Devi Mandir.”

“I have travelled all the way from Rajasthan to pay my respects to Dagdusheth Ganpati…” said Samudra Singh Rathod, a pilgrim. “The arrangement is extraordinary.”

A constable patrolling the area said several security personnel had been deployed to ensure the safety of the people that visit the old city area.

“We have installed CCTV cameras and precautionary measures have been given to officers and the public alike. Restrictions have also been implemented to stop vehicles from entering the mandal area to avoid traffic issues,” the constable added.