The students added that since no classes have been held since March 13, it is unfair to test students on a syllabus which is yet to be taught in its entirety to them. 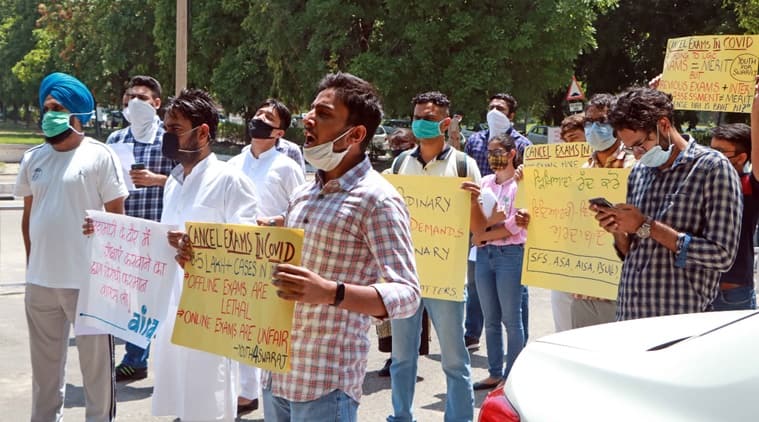 A group of student-led organisations and political parties held a protest outside the Panjab University (PU) administration block, while a syndicate meeting was going on, and submitted a memorandum against conducting final semester examinations at the university to syndicate members, on Monday morning.

The memorandum stated that since the announcement of the examinations, students and their families have been left in uncertainty and fear, unable to figure out the logistics of safe transportation and boarding in order to sit for their examinations.

As for conducting examinations digitally, the students stated that will only deepen inequality as the ‘digital divide’ will not allow a few students to write their examinations from various remote locations which they call home.

The students added that since no classes have been held since March 13, it is unfair to test students on a syllabus which is yet to be taught in its entirety to them.

Alternatively, the students in their memorandum suggested that guidelines submitted by the UGC for calculation of final marks on April 24 be followed instead of conducting final examinations.

These guidelines proposed a composite grading system where 50 per cent marks will be on the basis of internals and the remaining 50 per cent on the performance in previous semesters.

Coronavirus India Updates, August 5: Recovery rate rises to 67.19%; UP minister tests positive
We and our partners use cookies on this site to improve our service, perform analytics, personalize advertising, measure advertising performance, and remember website preferences.Ok