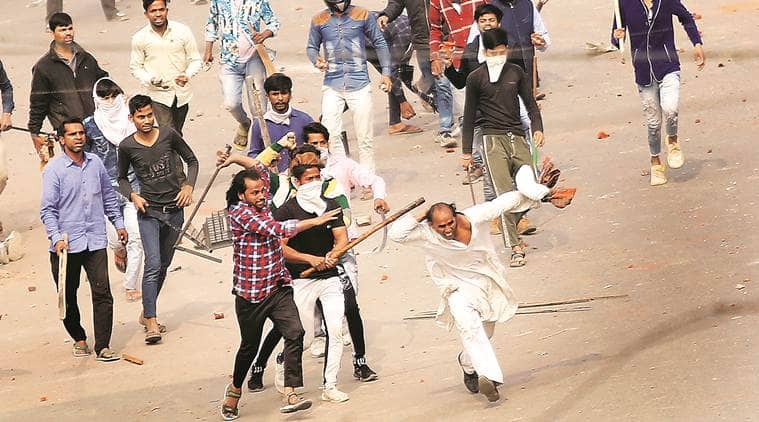 In embattled neighbourhood after neighbourhood in northeast Delhi, which has been in the grip of violence for three days, one story played through Tuesday from morning to midnight — groups of young men armed with sticks and rods looking for a fight, setting shops and homes owned by Muslims on fire. All right under the nose of the police who either stood as silent spectators, looked the other way or were plain missing when they were most needed.

The death toll from the violence touched 13 by tonight, including a Head Constable who succumbed to bullet injuries, and 12 civilians, most of whom also died of bullet injuries.

The day saw a flood of bloodied men being rushed to GTB hospital, many of whom were severely assaulted by violent mobs. The Rapid Action Force and Central Reserve Police Force arrived in the area only around 3 pm and were repeatedly pushed back by those armed with sticks and stones. The situation remained tense until late tonight with SOS messages being sent out from Muslim neighbourhoods of being walled in and people locking themselves inside their homes. Right through the day and into the evening, The Indian Express reporters witnessed several specific examples where the mob ruled the street as police stood right next to them:

* Between 7 am and 12 noon, across the lanes and bylanes of Maujpur, Babarpur, Kabirnagar, West Jyoti Nagar, Gokulpuri, The Indian Express witnessed young men bracing themselves for what they described as “action”. Collecting metal rods, breaking chunks of brick into smaller pieces. “We can’t repeat last night’s mistake,” said a 21-year-old pujari in a temple in Vrindaban. “We couldn’t sleep last night. They rained bricks on our neighbourhood. So we have come prepared to defend ourselves.” These preparations were in full view of small groups of police personnel.

Trump says ‘up to India’ to deal with situation

* At 11.15 am on Chajjupur-Kabir Nagar road, six policemen stood by and watched as hundreds of men holding rods and sticks, many with faces hidden behind motorcycle helmets, raised chants of Jai Shri Ram. As the men gathered outside the Sanatan Dharm mandir, one of them said: “For three days, Muslims have thrown stones at us, attacked us, and set fire to vehicles. We have been told they burnt a Shiv Murti in our shamshaan ghat. How many days will we keep quiet? So today we have come out, and we began collecting at 4 am. Since then we have taken matters in our own hands.” Another added, “But we were not sleeping yesterday either. Hindu sher hai, sota nahi hai.” 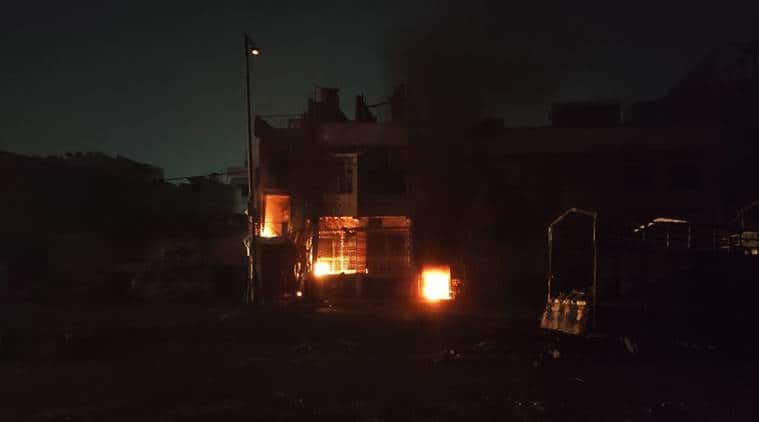 * Through the morning, small groups of armed men stood in 50-m intervals along a three-kilometre stretch that connects the Maujpur chowk to GTB hospital. “Across the road is Kabir Nagar, which is Muslim majority. We have to be prepared,” one said, helmet on his head. Each carried a pipe or a stick, but not all of them had been brought from home. Some were improvised from the material available at hand. Just outside a shut appliance store was a board that congratulated Gopal Rai, the Babarpur MLA on winning his election. At 11:45 am, a group of young boys, broke that board apart, and ripped out the metal pipes that held it together. “Mil gaya,” one laughed to the other.

* Around 1.30 pm, two bike-borne Muslim youths, who were going towards the Maujpur Chowk from Durgapuri Chowk were made to stop. The mob assaulted them. Security personnel rushed in, lobbed tear gas shells and dispersed the crowd. But they didn’t take much time to regroup — this became the pattern observed at violence sites across the area.

* Section 144 was in place but less than 20 Delhi Police personnel in Chajjupur watched as armed men roamed the streets. Between 11:30 am and 1 pm, The Indian Express counted at least eight times when the police personnel waved the crowd armed with rods to the side so that speeding ambulances and police jeeps could pass from the Maujpur chowk to GTB hospital. No action was taken, the armed men were allowed free movement. So, in the virtual absence of the police on the road, it was these armed men who maintained their own version of order. * Identification cards was checked by men in masks and Muslims were persona non grata. At 2 pm, right next to the Maujpur chowk, where the number of Delhi police personnel was higher than the rest of the road, suddenly loud shouts went up and a Mulsim man came under attack. The police stepped in to rescue him but not before injuries were obvious, and a ninth ambulance sped down the road. “Ye toh bach gaya hoga. Do aur ko toh bahut bura maara,” said one man with a tilak on his forehead. Another shouted as he read from his phone, “They have been attacking us too. Look at the names of the dead. Constable Ratal Lal. Rahul Solanki. If they kill ours, we will kill them too.”

Those who say ‘Bharat Mata ki Jai’ will stay in India: Himachal CM on Delhi violence

* In North East Delhi on Tuesday, there was another law that operated as well, one which banned the use of mobile phones, or any other recording devices. The people that roamed the streets watched like hawks, flagging down anyone that was recording a video.

Outside a Samsung Smart Plaza at 12 noon, two young boys on a bike were flagged down, and their phones thrown to the ground. “We are Hindu,” they said but to no avail.

Four journalists on the road were asked repeatedly to show identification, let off because of their Hindu names, but not before their phones were checked for videos, and a warning not to use them. Less than 3 km away, as they filmed, two NDTV journalists were attacked. In another spot, another journalist was shot. 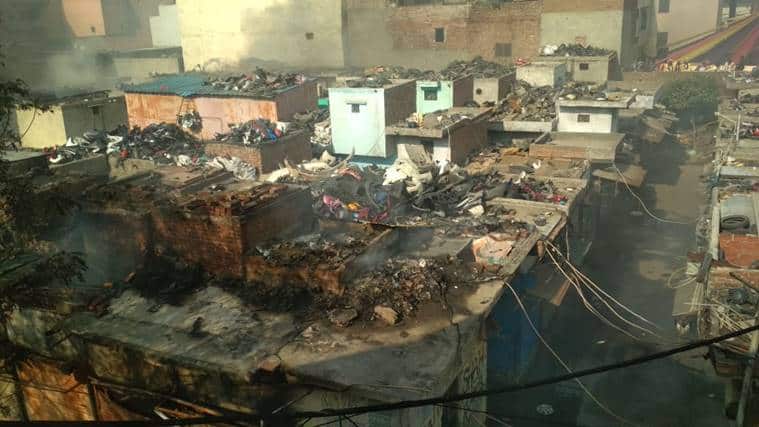 * At 2 pm at the Maujpur chowk, a 21-year-old man who identified himself as Gauri Shankar called out to five masked men. He pointed to the camera placed outside the grocery store he stood under. “Aur sab toh tod diye, ye vaala kyu chhod diya?”

By 2:30 pm, as the crowd grew ever more restive in Maujpur chowk, police personnel fired three teargas shells, which sent the crowds running back. And yet, the men in masks had projectiles of their own. At least six men, The Indian Express saw, carried glass bottles in their hand, that had petrol in them. About 100 m away, within full view of the police, they flung one into a two-storey home on the Kabeer Nagar side. A wind blew, and the fire blew out. Another was flung. As they chanted slogans, they identified the homes as they walked. “Ye musalman ka ghar hai,” they said. Asked how they knew, one man responded, “We are all from here. You see all the shop shutters down. Some are businessmen, some have not gone to office today. Ab toh aar ya paar ki ladai hai.”

By 4 pm, there were signs of some reinforcements. Two vajra vahans, one riot police vehicle, and six buses, carrying paramilitary forces of the RPF and the SSB pulled in to the Maujpur chowk. But they got a guard of honour too. Four men in two motorcycles, steel pipes in hand followed them, and shouted “Delhi Police Zindabad.” Another man on the street screamed, “Musalmaanon ko danda maaro, hum tumhaare saath hai.”

* By afternoon, there was a pattern: properties owned by Muslims were targeted for arson and police arrived after the stores were set ablaze. First to be set afire was a hair-cutting salon in West Jyoti Nagar around 4.54 pm as a crowd cheered. Police personnel men rushed in, aimed guns at the mob, which was quick to disperse. Minutes later, reports came of another juice shop being attacked near Durgapuri Chowk. By the time forces reached there, local traders had got hold of a miscreant, who was handed over to the police and whisked away in a jeep.

* The absence of police ensured that arsonists got a free run: at 5.30 pm, vehicles were dragged out of a repair shop and set on fire. The shop was owned by a Muslim trader who has been a resident there for the last two decades, a local said. Soon after, signboards bearing names of Muslim proprietors were taken down in the area as a precautionary measure.

* Around 6.30 pm, more vehicles were set on fire outside the Gokulpuri tyre market, which shares a boundary with a petrol pump. There was no police presence in the vicinity of the market, charred and smouldering. The Brijpuri main road, which takes one to the Chandbagh anti-CAA protest site, could finally be accessed around 8 pm with the entry of a large number of RAF personnel. Men with rods and sticks could be seen patrolling the streets. Around 8 pm, the flames outside the market had subsided, but the horizon had turned crimson. A residential property next to the site was up in flames, charred remains of several vehicles lay overturned. Not a single streetlight was functional. A few metres ahead, a large mob could be seen freely moving around and targeting specific properties as police watched.

As Fire Department officials struggled to put out the flames that had spread across the market, and everywhere else, their boots crunched over black soot, molten tyres, and shards of broken glass, shattered like North East Delhi’s harmony. One building loomed over the market, its windows in plain sight.

The board on top of it read: “Gokalpuri Police Station.”

Soorya festival goes online
We and our partners use cookies on this site to improve our service, perform analytics, personalize advertising, measure advertising performance, and remember website preferences.Ok