The government released its first draft of the bio-economy report 2020 at the Bengaluru Tech Summit. While the report estimates the bio-economy of the state at USD 22.6 billion (Rs 1,67,240 crores) and growing at present, it is projected to USD 42 billion by 2025. 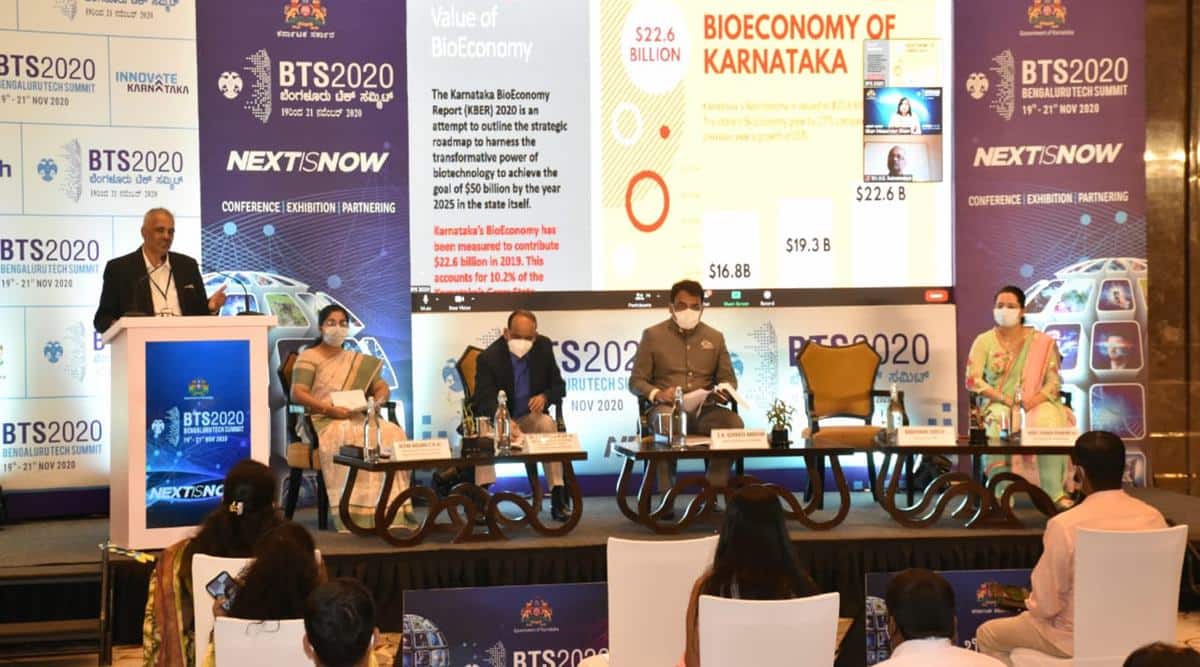 The Karnataka government Friday announced that it has set a target to become a USD 50 billion biotechnology market by 2025, contributing to half of the national bio-economy projected to be achieved by then.

The government released its first draft of the Bio-economy Report 2020 at the Bengaluru Tech Summit on Friday, highlighting achievements and earmarking targets for the next five years. The report also claims that the same has grown by 14-17 per cent in the previous two years and that the state contributes 10.3 per cent to the gross state domestic product (GSDP) of USD 221.82 billion. While the report estimates the bio-economy of the state at USD 22.6 billion (Rs 1,67,240 crores) and growing at present, it is projected to USD 42 billion by 2025.

“We are aiming higher and our government has set a challenging task of more than doubling the value of Bioeconomy in the next five years. Our target is to raise Karnataka’s Bioeconomy share to 50% of the National BioEconomy revenue target of $100 billion by the year 2025,” Deputy Chief Minister C N Ashwath Narayan said.

The Minister, also in charge of Electronics, IT-BT & Science & Technology portfolios added that Karnataka’s confidence to achieve the target much earlier stems from the fact that presence of over 35 state and central research institutes in the State.

Meanwhile, Biocon CMD Kiran Mazumdar-Shaw, who chairs the Karnataka Vision Group on Biotechnology said, “To bridge the gap in likely revenues, the report recommends a series of strategic initiatives to overcome this hurdle and cross the target in time, in the continuing spirit of the state’s industry, policymakers and government working together with a visionary approach.”

Among recommendations noted in the report, placing Karnataka as a vaccine hub. “The COVID-19 pandemic has brought global attention to vaccine hubs and as one of India’s pre-eminent Biocluster, Karnataka should proactively attract few vaccine manufacturers from India and abroad in a special vaccine hub,” Mazumdar-Shaw

In addition to this, the report also recommended setting up at least one biomanufacturing hub outside Bengaluru. “This hub can be in a minimum of 100 acres. The hub can house five to ten dedicated manufacturers with 10-20 acres each, with common infrastructure facilities,” she recommended.

What did Ahmed Patel think of Rahul?

How the Kerala-based CSB Bank made a dramatic turnaround
We and our partners use cookies on this site to improve our service, perform analytics, personalize advertising, measure advertising performance, and remember website preferences.Ok