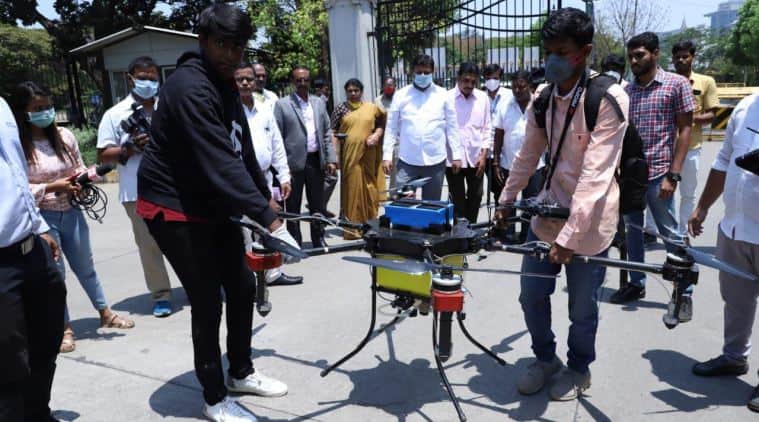 Migrant welfare, fake news, farmer distress. Karnataka is addressing all this and more during the Covid-19 lockdown in a way only it can: technology.

Since the nationwide lockdown was announced on March 24, the state has deployed a number of tech interventions to power through these unusual times, whether it’s flying drones with in-built speakers for public announcements or a hunger helpline that uses geo-tagging.

A helpline to feed the hungry

On March 28, the state’s Labour Department started the 24×7 free-food helpline number 155214, targeted primarily at the migrant population. “The migrant labourers are suffering a lot during this lockdown period,” said Dinesh HB, Joint Director, Department of Information and Public Relations (DIPR), where the helpline runs from. “And through the Dasoha-2020 app, volunteers take care of delivery.” Dasoha means giving or charity in Kannada. The volunteers are mostly IT professionals, small businessmen, medical professionals, civil defence force members, Red Cross members and students.

But the helpline is more than just a regular call centre. It uses a geo-tagging system to identify the area of the caller.

Once the caller requests for food, the request is transferred to the concerned sub-zone where the app will assign the request to the nearest volunteer, who picks up the food packets from the kitchens, functional in eight locations across the city. It is then delivered to the caller.

“The centre is operational 24/7 in three shifts in 20 seats per shift and 30 lines. Around 70% of people working here are physically challenged,” said Dinesh, “The call centre supports calls in Kannada, Hindi, Tamil, Telugu and English language.”

The menu includes a variety of items: Chitranna (lemon rice), vegetable pulao, tomato bath (rice), capsicum bath (rice), roti and chapati. While initially the helpline was managing 30,000 meals per day, the number soared to 1.8 lakh meals per day within a week. As of May 7, the department has served 3.4 million meals to people.

Another initiative by the DIPR is a dedicated team, Janasnehi, to bust fake news. A full-fledged Social Media Centre and Control Room is operational 24X7 to facilitate essential information. A Telegram page, ‘Covid-19 Karnataka Sahaya’, which has over 22,000 followers and around 1,000 floating viewers, provides useful updates and answers queries with content sourced by eminent doctors, social workers, media personnel and officers from different departments.

In April, P Manivannan, then secretary DIPR, said it is handled by teams of five members including doctors and officials in eight-hour shifts. The members in the group mainly have queries about home quarantine procedures, coronavirus testing centres and labs. “We have to curb fake news and misinformation about Covid-19. Hence we created the group in Telegram which can have unlimited members,” said Manivannan. “The best way to reduce fake news and panic is by providing real-time answers to the questions and doubts by the public.”

In some parts of the state, drones have become important means of information dissemination. Isha Pant, Deputy Commissioner of Police (Command Center), Bengaluru City Police, said, “Drones which are used by us have inbuilt speakers which help in making important announcements to the public.” Pant said that they have implemented this in several places and it has “proved to be useful.”

These devices have also come in handy for surveillance. According to Rohini Katoch Sepat, Deputy Commissioner of Police (South), the drones are used to effectively deploy more personnel to enforce measures in certain areas in the city. “The drones are being used to check movement of people and vehicles in high-density areas, with this we will be able to strategise and effectively deploy police,” she said.

A war room for farmers

The ‘Agri War Room’ in Bengaluru is aimed at solving farmer distress during the lockdown. “The farmers were anxious since they were unable to sell their produce. So the war room was set up to get agricultural inputs and farm implements,” said Agriculture Minister B.C. Patil, ”Four officers are operating the war room in two shifts from 8 am to 2 pm and 2 pm to 8 pm daily.”

The government also has a Bruhat Bengaluru Mahanagara Palike or BBMP War Room which has surveillance data of people in an eight-kilometre radius around the residence of the confirmed patient. “The BBMP tracks the mobile phones of quarantined people through their GPS location. If they go beyond the containment zone, we will call them and ask them to go back home,” said Suresh L Public Relation Officer, BBMP.

The state has also developed a ‘Corona Watch App’ to monitor people under quarantine and informing their contacts about the same.

For all the latest Bangalore News, download Indian Express App.