The accused got into a violent confrontation with police personnel who tried to save the driver. Police said one person involved in the incident has been arrested. 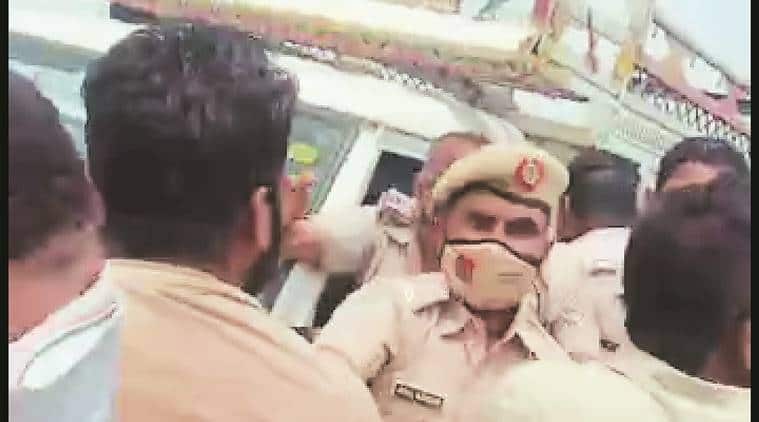 A 25-year-old pick-up truck driver from Nuh was allegedly beaten up with sticks by a group of men while he was transporting buffalo meat to Gurgaon Friday morning. The accused also got into a violent confrontation with police personnel who tried to save the driver. Police said one person involved in the incident has been arrested.

An FIR has been lodged following a complaint by the victim, Lukman, under IPC sections including rioting, unlawful assembly, voluntarily causing hurt.

“Pradeep Yadav (26), a resident of Rajiv Nagar, has been arrested. So far, he does not appear to be linked to any fringe elements or political party. Investigation is on to nab the other accused,” said Subhash Boken, PRO of Gurgaon Police.

“The victim was rescued and taken to the Government Hospital in Sector 10 for treatment, from where he was referred to Safdarjung Hospital in Delhi,” said Boken.

In his complaint, Lukman claimed the incident took place when he was heading to a shop near Jama Masjid in Gurgaon. “Near the traffic signal in Sector 5-6, men travelling on four-five motorcycles tried to stop me but I sped to the truck market near the masjid. There, the men surrounded me, broke the glass of my vehicle and beat me with sticks,” he alleged.

The men, Lukman claimed, forced him back into his vehicle and took him towards Sohna, where they again beat him up at Jail mod, Badshahpur.

According to police, personnel deployed at a nearby checkpoint soon arrived at the spot and helped Lukman get inside his truck. Additional force was deployed to shift the victim to a police vehicle, even as the men tried to stop them. Police said the men manhandled the personnel as well, and broke the glass of the police vehicle.

In one of the videos that has surfaced of the incident, Lukman can be seen sitting cross-legged on the ground, his hands and legs caked with mud, while a crowd surrounds him.

In another 48-second video, he can be seen sitting inside the pick-up truck, its windshield cracked in two places, as some police personnel speak to the crowd. A man then lunges towards Lukman, even with police standing in between, and a voice can be heard saying “they are hitting”.

In a third video, police can be seen pushing back the crowd standing on the passenger side of the truck. A man in a brown T-shirt lifts a rock and hurls it at the windshield. Meanwhile, another group of policemen can be seen leading Lukman out of his vehicle and into a police car. The crowd tries to reach the vehicle and grab Lukman, even as personnel push them away. As the vehicle attempts to leave, the siren turned on, the men stand in front to stop them. Some of them attempt to force open the door of the police car.

Before the violence, Lukman managed to call the man to whose shop he was meant to deliver the meat, who alerted police. Speaking to The Indian Express, shop owner Tahir Qureshi said: “He called me and said some men were following him. He was scared… when he arrived at the shop, the men immediately surrounded him and began hitting him with sticks. They then took him somewhere else in his pick-up truck… We would have intervened, but were concerned it would worsen the situation. I alerted police instead.”

Former Goa CM Digambar Kamat demands ban on masks with tricolour pattern
We and our partners use cookies on this site to improve our service, perform analytics, personalize advertising, measure advertising performance, and remember website preferences.Ok