Pranay Ashok, spokesperson for Mumbai Police, said, “We now run about 30 trains per day and are working to increase the number.” Officials said they are preparing to run 600 Shramik trains over the next one week from across Maharashtra. 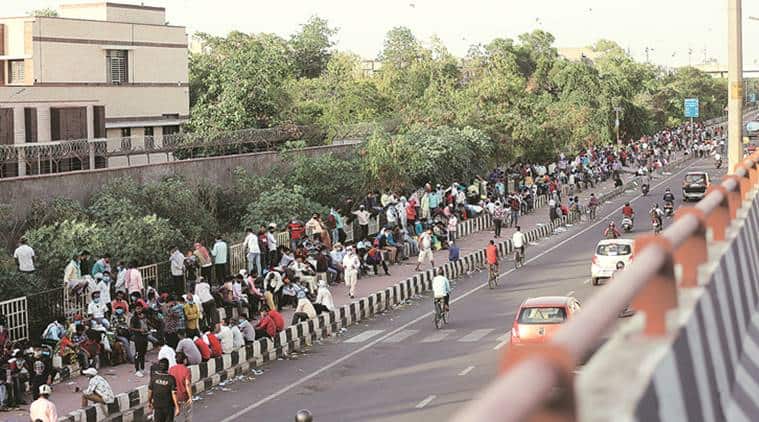 Since the Shramik special trains started on May 1, over 325 trains have ferried over 5 lakh migrant workers from Maharashtra to Uttar Pradesh, Bihar, Madhya Pradesh and West Bengal. But in Mumbai alone, nearly 3.5 lakh migrants of the total 6 lakh who registered themselves for a seat, are yet to board one of these trains.

As their wait grows, they are gathering in large numbers every day outside stations, hoping to get on one of these trains.

Pranay Ashok, spokesperson for Mumbai Police, said, “We now run about 30 trains per day and are working to increase the number.” Officials said they are preparing to run 600 Shramik trains over the next one week from across Maharashtra.

However, these numbers are of little solace for workers like Firoz Alam, who has been waiting for over 15 days for their turn. Dejected at not being able to board a train at CSMT, Alam decided to try out bus depots in Thane, Navi Mumbai or Ghatkopar, to see if he could get a bus that the state transport department was running free of cost to drop workers at the Maharashtra border.

With his 10-year-old son, Alam, whose village is in Bihar, rented a pick-up truck to be dropped to Thane. “We were turned away… We slept on the footpath at night and returned the next day to CSMT. I spent close to Rs 1,000 just going between stations and bus depots, all in vain,” said Alam, who had filled up a form for boarding a train with Nagpada police in the first week of May.

With the crowd swelling at stations, Home Minister Anil Deshmukh Wednesday appealed to workers to not come until called by the police.

The appeal made no sense to Shamsheer Khan (22), who had come to CSMT with his family of five to board a Lucknow-bound train without confirmed seats. “Even after 15 days, there is little clarity on our application. We have no work and food, how will we survive?” asked Khan, who was asked to vacate his rented house by his landlord.