The construction of Barapullah Phase-3 elevated corridor, which was scheduled to be completed by October, 2017, but missed the deadline because of two road blocks, has inched closer to completion.

The project is likely to be fast tracked now as the Public Works Department (PWD) has resolved one of the issues of shifting of an overhead high tension power line, which crosses the under construction corridor over Yamuna almost parallelly, officials said.

The elevated corridor will serve as a boon for commuters and will connect Sarai Kale Khan in south Delhi with Mayur Vihar-I in the east,significantly reducing the travel time between the two areas.

A senior PWD official said that the high tension electricity line belongs to Delhi Transco Limited (DTL) and had to be shifted as it posed a risk for commuters.

“The shifting of high tension line has been started. PWD will do it under DTL’s supervision. The re-routing of the transmission line will need five new towers to be constructed in a way that the line crosses the elevated corridor perpendicularly. The new towers would be taller than the existing ones,” the PWD official said requesting anonymity.

He added that foundation of the towers has almost been completed and the estimated expenditure of shifting of the utility would be around Rs 20 crore. 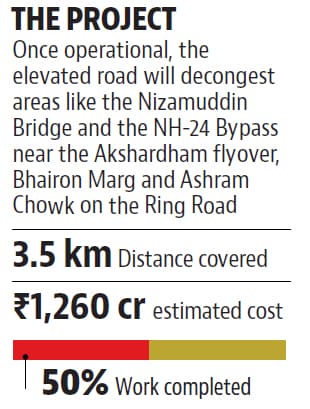 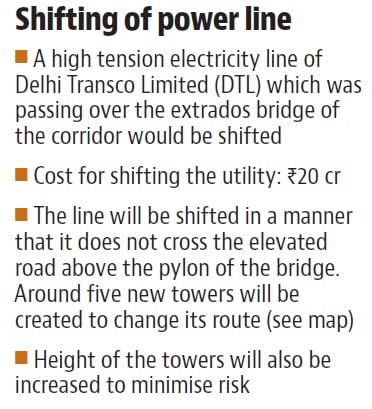 Barapullah Phase-3 project, which started in 2015, was to be completed in October 2017, but it missed the deadline due to slow pace of work. Over 50% work has been completed till now and authorities hope to complete the remaining by 2020 – a delay of almost three years. The estimated cost of the project is Rs 1,260 crore.

The Barapullah Phase-3 project envisages building a 3.5km elevated road across the Yamuna floodplains to improve connectivity between east, south and New Delhi and decongest the Nizamuddin Bridge and NH-24 bypass near the Akshardham flyover, Bhairon Marg and Ashram Chowk at Ring Road. Once completed, it will cut the travel time between east and south Delhi to 20 minutes from the current 60 minutes.

Delhi’s Lieutenant Governor Anil Baijal has given his approval to form a seven-member expert panel to evaluate the Social Impact Assessment (SIA), which was conducted for the acquisition of two patches of private land for the project.

Major construction activities had to be stopped because of two private plots, measuring 500 sqmt and 250 sqmt, coming in the way of the project.

“…the lieutenant governor of National Capital Territory of Delhi hereby constitutes and appoint following multi-disciplinary expert group to evaluate the SIA report for the acquisition of land … of village Nangli Rajapur, New Delhi for the project,” an order issued by the L-G’s office on July 12 said.

Divisional commissioner-cum-secretary of the revenue department will be the chairperson of the group while additional commissioners of south and north municipal corporations and joint secretary (policy plan), National Disaster Management Authority, Government of India will be the members of the group. The panel will also have three experts from social and technical fields — Vidhu Verma, professor at Centre for Political Studies at Jawaharlal Nehru University; Neera Chandhoke, former political science professor at Delhi University; and VK Minocha, professor Delhi Technological University (DTU) – as its members.

The SIA report was submitted to the land and building department of the city government in March this year. The SIA says tenant farmers, who have temporary settlements in the area, would be the worst affected. The report recommended the resettlement and rehabilitation of eight of the 16 tenant farmers.

PWD officials believe that formation of the expert group would expedite the land acquisition process.

“The expert panel will submit its report in two months. District magistrate of the area will then start land acquisition process as per the recommendations of the expert group,” the official said.