At Lok Nayak Hospital, where the bulk of victims were taken, relatives who had started gathering near the Emergency ward around 7 am had to wait till 3 pm before they were allowed inside the mortuary to identify bodies.The identification process itself was marred by confusion. Early Sunday morning, panicked phone calls had started going to various people in Bihar, Jharkhand and Uttar Pradesh. Mohd Ilyas (40) from Kori Rawana village in UP’s Moradabad district had just woken up around 5.30 am when his cousin called him.

“Dilli ki building me aag lag gayi hai, bhai andar the. Fauran nikalna padega (a building in Delhi has caught fire. Our brothers were inside; we will need to leave immediately),” he said.

Three hours later, Ilyas was in Delhi with 15 others from his village, not knowing that he would have to spend the next eight hours looking for his younger brother Sajjad (19), who made school bags at the factory in North Delhi’s Anaj Mandi. The bodies of his cousins, Mohd Imran, Mohd Ikram and Sameer, were identified after a lot of running around, but there is no news of Sajjad anywhere.

“I went to all three hospitals and checked the wards but I couldn’t find him. After losing hope, I finally came to the mortuary at Lok Nayak Hospital but he isn’t here either,” said Ilyas. 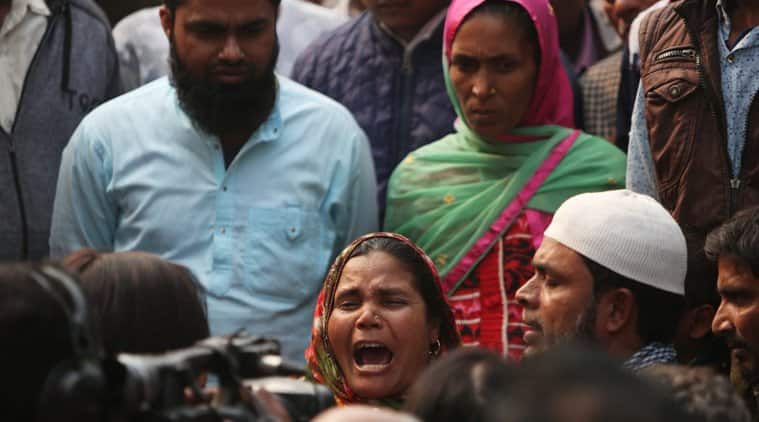 His helplessness and confusion was shared by many family members at the three hospitals — Lok Nayak, Lady Hardinge and Ram Manohar Lohia — where people ran pillar to post looking for the answer to just one question: Is my relative alive or dead? A question that, for many, remained unanswered even as the day ended.

At Lok Nayak Hospital, where the bulk of victims were taken, relatives who had started gathering near the Emergency ward around 7 am had to wait till 3 pm before they were allowed inside the mortuary to identify bodies. Access to the burn ward was also restricted.

The identification process itself was marred by confusion. Hazy photos of the body from inside the mortuary would be clicked by a relative, as several others huddled around, staring at the phone in an attempt to identify if it was indeed someone they knew.

Around 1 pm, at the Emergency ward in Lady Hardinge, only two bodies out of nine had been identified. As police tried to trace the next of kin, families kept shuffling between hospitals for clarity. “I am looking for my minor son and have already visited Lok Nayak. We were not allowed to see the bodies and had to come here. No one is answering clearly. He is just a child and all I want to know is what happened. At this point, we don’t even know if he is alive or not,” said Mohammad Ainul, father of 15-year-old Sehmat, whose whereabouts could not be ascertained till evening.

Sehmat, who was from Samastipur, had arrived in the capital a few months ago to earn money and support his family. With no phone to get in touch with his family, it was through word of mouth in the village that prompted a search for Sehmat, initiated by a relative who rushed from Sonepat. 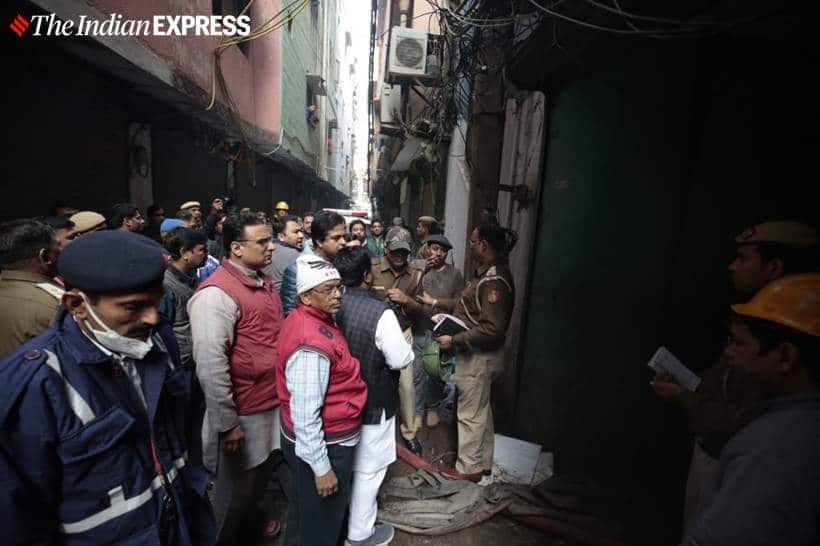 Brothers and sister-in-law of victim Mohammad Naushad, from Samastipur, Bihar, came agitated to the medical ICU at Lady Hardinge. They had visited all three hospitals, but in vain. “We have come from the Emergency ward, and they told us there is one survivor here. I don’t know if my brother is alive or dead. I don’t even know where he’s been admitted,” said Naushad’s brother.

Rukhsana Khartoum’s two brothers, Mubarak (25), and Ghiyasuddin (18), were caught in the fire, and like others, she was unsure where to go. She said she got a call from her relatives in Nariyar village, Saharsa, only in the afternoon, after which she and her husband, who work as labourers and stay in Noida, rushed to the hospital.

While Khartoum knew early on that Mubarak had passed away, it was much later that she was handed a photo of her younger brother from the police, informing her that he was dead.

For many, there was no closure even as the day to drew to a close. Raees (45), who was looking for his nephew Gannu (18), found no trace of him. “I will make rounds of the hospitals again tomorrow. He has to be somewhere. He cannot just disappear. At this point, all we want is some clarity. That’s the most I can hope for,” he said.

(With inputs from Amil Bhatnagar) Uphaar Cinema fire, 1997
Near Green Park
Toll: 59 dead
The fire broke out on June 13, 1997, during the screening of the movie Border. A stampede followed and over 100 people were injured

Lal Kuan Chemical
Market fire, 1999
Lal Kuan, Old Delhi
Toll: 57 dead
The fire broke out in a godown in the heavily congested area of Lal Kuan in May 1999, where a chemical market has existed for decades. An enquiry report said the incident took place as a highly inflammable chemical was stored incorrectly. The fire spread rapidly. Despite orders to shift the market, it still exists, though many shops have shut or have started selling other products

Hotel Arpit palace fire, 2019
Karol Bagh
Toll: 17 dead
Fire at the 37-room hotel broke out early in the morning, in the AC unit of a room where two people were staying. Enquiry report said the hotel was operating without any approved building plan since it opened in 1993, and its owner had “managed” licences over the years with the “connivance” of officials

For all the latest Delhi News, download Indian Express App

Over 3,000 NRKs to arrive in Kochi
We and our partners use cookies on this site to improve our service, perform analytics, personalize advertising, measure advertising performance, and remember website preferences.Ok