The artisans usually start receiving orders from February, following which they start purchasing raw materials. However, as lockdown was enforced from March end and strict restrictions continued till recently, the potters said they lost even the confirmed orders. 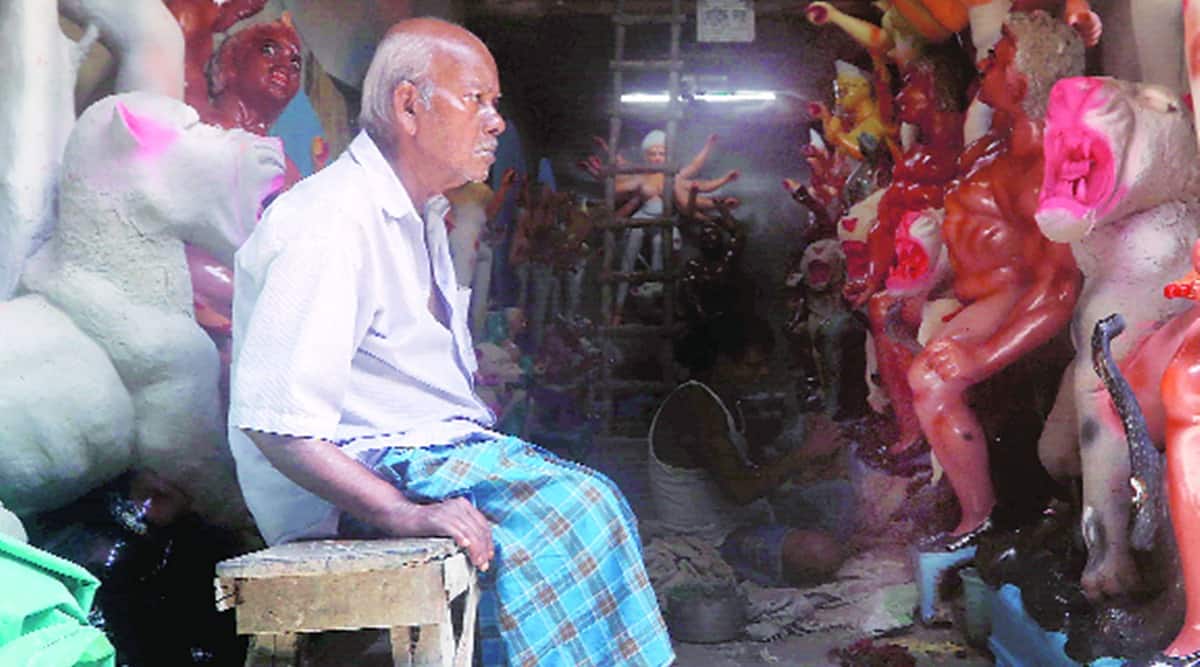 With only a few days to go for Durga Puja, artisans in Kumartuli are hoping to bag last-minute orders that will clear their stock of clay idols and save them further losses.

The potters’ hub in north Kolkata is reeling under mounting losses this year as orders for idols were cancelled following the outbreak of Covid-19 and the subsequent lockdown.

With organisers planning a low-key Durga Puja, the shadow of muted celebrations not only dampened the business of artisans, but also their spirit.

While draping a sari on a six-foot idol, Maya Pal recounted how Durga Puja used to be the best time of the year for her. But this year has not been kind. Pal, who is over 50 years, still has four more unsold idols. Despite running a high temperature for the last few days, and swollen feet, she was busy giving final touches to the day’s last order.

“I made 25 durga idols this year. Four of them are yet to be sold. It is such a bad phase for all of us. I wish I get a last-minute order for my remaining creations,” Pal told The Indian Express.

Tapan Ghosh, a clay artisan working at Nilam Pal Studio, had a similar story. “A few idols are still in stock. Every year around this time, we hardly have time to breathe. This year, we are still waiting for buyers,” he said.

With business taking a hit, the budget for idols was slashed by more than 50 per cent. Walking on a tightrope to balance budget and creativity, artisans had to cut corners to meet the very few demands that trickled in. So, idol sizes were drastically reduced. Usually the idols stand tall at 15 feet or above. In

The creativity of Kumartuli artisans draws a huge demand from other countries such as Canada, Australia , the US and the UK. But this year, the demand has dropped considerably. Mintu Paul, who has a family legacy of idol making, has been exporting idols to several countries for many years.

“Last year I had received 12 overseas orders involving high budgets. This year, I have got orders from only five countries, including the West Indies, France and Austria. The last one I got was about seven days ago from Italy,” he told The Indian Express.

According to the artisans, they get approximately 200 orders from abroad. Those orders are down 90 per cent this year.

With organisers scaling down, the demand for single-platform idols has grown higher. People are not ordering separate idols of Lakshmi, Saraswati, Ganesha and Kartik, but preferring them to be fused on a single scaffolding.

The artisans usually start receiving orders from February, following which they start purchasing raw materials. However, as lockdown was enforced from March end and strict restrictions continued till recently, the potters said they lost even the confirmed orders.

“Getting labourers was a challenge. Prices of every item have gone up, affecting the budget of big pujas. Last year, 63 idols were sent abroad.

This time, I got only 20 overseas orders,” said Babu Paul, a noted idol maker and secretary of Kolkata Kumartuli Mritshilpa Sanskriti Samiti.