Amid heavy police presence in the area in the wake of the Supreme Court's Ayodhya verdict a day earlier, most leaders stressed on Hindu-Muslim unity. 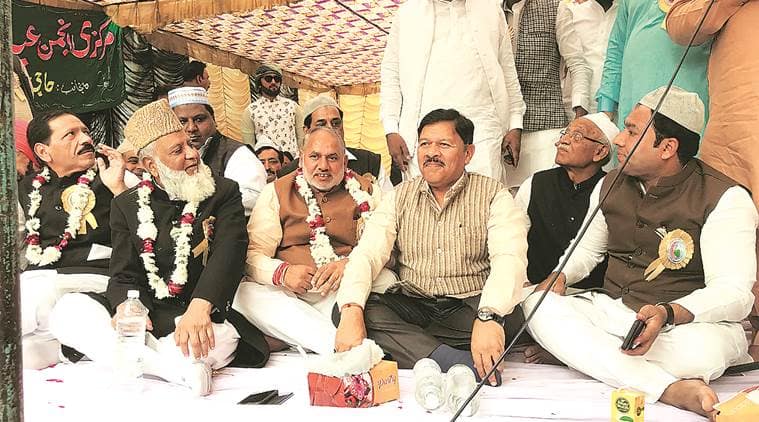 A gathering to celebrate Eid-e-Milad-Un-Nabi near Old Delhi’s Bara Hindu Rao mosque saw senior leaders of the BJP, AAP and Congress share the stage and make appeals for communal harmony.

Amid heavy police presence in the area in the wake of the Supreme Court’s Ayodhya verdict a day earlier, most leaders stressed on Hindu-Muslim unity.

Stating that the country’s atmosphere has been peaceful in the past five years of the BJP government, Jaju said: “In the morning, I took part in a Guru Parv of Guru Nanak Dev ji… now I am here and in the evening, I will take part in a kirtan at Connaught Place’s Hanuman Mandir. This is the beauty of our country.”

Referring to the Ayodhya judgment, he said people and religious heads have stressed on maintaining peace.
Prakash said: “When children are born, their names are decided later… first, they are born human. I am convinced that with the blessings of Allah, we will take the country forward.”

After the speeches, the gathering of over hundreds marched from the mosque, passing through Lahori Gate, Khari Baoli and stopping at Jama Masjid.

Hazi Mohammad J Ahmed, president of the committee, said the platform has seen politicians from different parties in attendance for years. On the verdict, he said, “We will follow the decision, we respect the court’s order.”
Committee vice-president Bhai Meherban added: “Today, Minister Imran Hussain said Islam teaches us that one should go as far as possible to seek good education and spread brotherhood.”

On the sidelines of the event, Lamba, who recently joined the Congress from AAP, said: “There are people of all religions on stage, and we are taking forward the message of Prophet Hazrat Muhammad Sahib, which is peace and brotherhood.”

“If you go to India Gate, you will see people from all religions in the list of martyrs. The blood of people of all religions is in India’s soil,” she said.

Terming the judgment as “unprecedented and historic”, Delhi BJP president Manoj Tiwari Saturday said he had asked the state unit to avoid making controversial comments on the issue. In a meeting, the Delhi Congress also passed a resolution saying the party honoured the judgment.