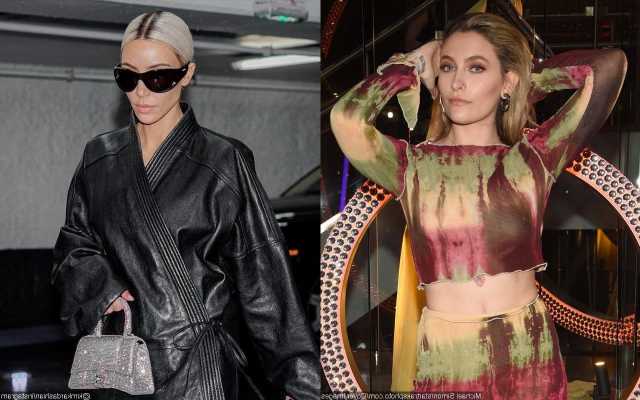 Calling her participation in the advertisement campaign ‘a full circle moment,’ the daughter of late Michael Jackson admits that she has been a fan of ‘The Kardashians’ star and her style.

AceShowbiz –Paris Jackson is raving about her latest photoshoot session. Having taken the role as one of the models for the new swimwear line campaign of Kim Kardashian‘s SKIMS brand, the daughter of late Michael Jackson took to her social media account to express her joy.

On Monday, July 25, the 24-year-old shared a set of pictures from her modeling gig with the SKIMS photography team. “Doing this shoot was a blast, and the team was impeccable,” she wrote in the caption, tagging SKIMS’ Instagram account. She continued to advertise the swimwear line by writing, “SKIMS Swim new collection drops this thursday, july 28th at 9AM PT / 12 PM FT.”

In the 5-photo carousel, Paris could be seen rocking the brand’s long-sleeved zippered one-piece. In one of the snaps, she was seen posing with the zipper down, showing off the tattoos she has on her chest. Delivering various gorgeous poses, she looked stunning while basking under the sun in the swimming pool.

The King of Pop’s daughter also admitted that she’s a fan of the former “Keeping Up with the Kardashians” star’s fashion sense. “I’ve known Kim for a while and have always admired her style, so to be in the latest swim campaign for SKIMS is a full circle moment,” Paris said in a press release via PEOPLE. She went on to add, “I love the brand and doing this shoot was so much fun.”

In addition to Paris, the new ad campaign also saw singer Bella Poarch and actress Madison Bailey coming in as the models. In the same release, the “Dolls” singer added, “I’m so thrilled to be a part of the new SKIMS Swim campaign! I’m obsessed with the new collection – from gloves to dresses, there is so much to choose from and I love how the brand always pushes style boundaries this way. I couldn’t be more excited to work with them.”

Meanwhile, the “Outer Banks” actress showered SKIMS with praises for its iconic campaigns. “To be a part of the latest one for Swim was so exciting! I’m a huge fan of the brand and this collection is so fun, I’ll be wearing it all Summer long,” she gushed.