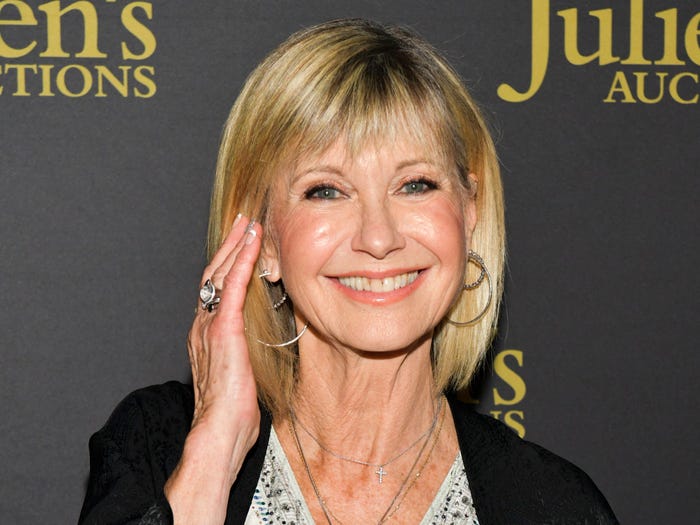 Olivia Newton-John hopes next year will be much better than 2020.

The "Grease" star shared a touching message with her more than 429,000 fans in an Instagram video on Christmas Day.

While sitting before a picture-perfect Christmas tree, Newton-John said, "I just wanted to wish you all the happiest and healthiest holiday season."

"I hope 2020 brings us new things and better news. Keep your spirits up, think positive thoughts. We'll get through this. This too shall pass,' she added

The encouraging message from Newton-John, 72, comes amid her ongoing treatment for stage four breast cancer.

Newton has remained candid about her battle with breast cancer, of which she was first diagnosed in 1992, according to the Olivia Newton-John Cancer and Wellness Centre website.

The Sun reports that in May 2013, Newton-John revealed that she was battling cancer for a second time after the disease returned and spread to her shoulder.

People reported that Newton-John discovered the lump on her right shoulder after a minor traffic accident that year. Newton-John first thought it was related to bruising from the accident, but medical tests found that the disease was back, the publication reported.

Newton-John initially chose to remain silent on the diagnosis but opened up during an interview on "Sunday Night," an Australian TV show affiliated with CNN.

"I thought, 'It's my life,' and I just decided to keep it to myself," she told the TV show.

"I'm one of millions in this fight — I shouldn't say fight — in this journey. A lot of people see it as a fight, and wherever you choose to see it, that's your prerogative. I see it as part of my mission," Newton-John added.

In 2017, Newton-John said in a statement that her breast cancer had once again spread, this time resulting in a tumor in her lower back.

The "Physical" songstress told viewers on "Sunday Night" that the cancer was back for the third time in September 2018.

At the time, Newton said on "Sunday Night" that she had undergone radiation, taken on a healthier lifestyle, and used "cannabis oil" as part of her treatment.

In February, Newton-John appeared with her daughter, Chloe Lattanzi, on the Australian talk show "The Project" and said she was doing "really well."

"At my last MRI, which is an exam where they look inside, things are shrinking, going away, staying the same and I'm living well with it and I'm feeling great," Newton-John said.