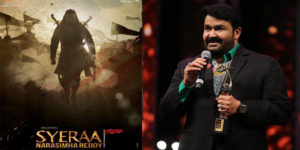 Malayalam Superstar Mohanlal has extended his support for Ram Charan and Megastar Chiranjeevi starrer upcoming movie Sye Raa Narasimha Reddy, which is gearing up for grand release on 2nd October. It is known news that Sye Raa is a multilingual big budget drama, which will be released in Telugu, Tamil, Hindi and Malayalam. Sye Raa is a dream project of Chiranjeevi, which is being made on the lavish budget of Rs 300 Cr. Everyone is aware of that Power Star Pawan Kalyan has given voice over for Sye Raa Telugu teaser and now according to the latest update, Malayalam Superstar Mohanlal will be doing voice over for Sye Raa Narasimha Reddy’ teaser, which will be unveiled on 20th August.

Few days ago, the photos of Pawan Kalyan from his dubbing studio along with his brother Megastar Chiranjeevi are doing the rounds on social media. Konidela Production company thanked to Pawan Kalyan by sharing a post on Twitter “A huge thanks to Pawan Kalyan garu for giving his voiceover to the Telugu teaser of #SyeRaa. Can’t wait to show it to you all! #SyeRaaTeaser on August 20th.”