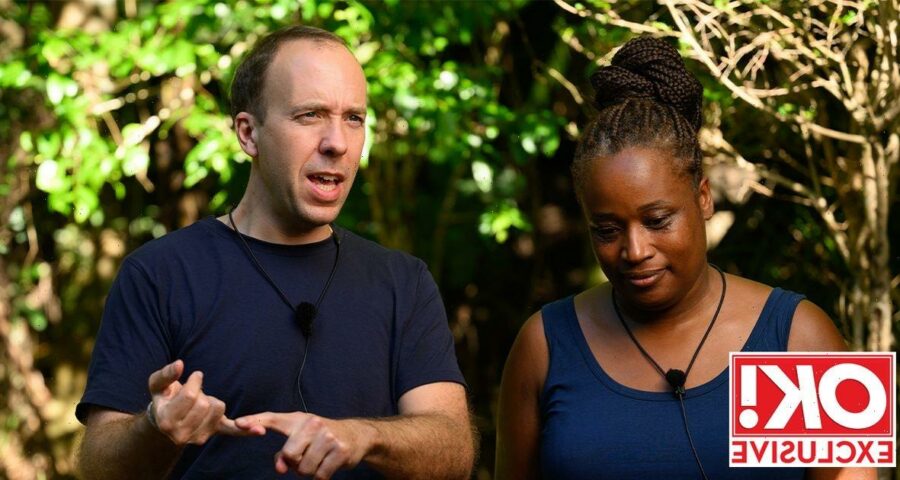 The presence of disgraced Tory MP Matt Hancock in the camp has “robbed” Charlene White of a “life-changing” experience on I'm a Celebrity… Get Me Out of Here!, close pal Denise Welch has told OK! .

Newsreader and Loose Women panellist Charlene, 42, was excited to join the camp, telling friends before she flew to Australia that she wanted to show her fun side to fans.

But Denise, who has worked with her for two years on the ITV1 hit, has claimed we’re not getting to see that side of her because of the way Matt’s arrival changed the camp’s dynamic.

“I don’t think she’s enjoying the experience she was promised,” said Denise, 64. “I’m angry about the life-changing experience that has been robbed from her.

"She’s a strong, feisty, opinionated but hysterically funny woman. But she’s not being given the screen time she deserves to show the world a side to her they might not see on Loose Women or the news, all because I think every thought of hers surrounds, ‘How should I be around Matt Hancock?’”

When the Health Secretary arrived, Charlene – who shares kids Alfie, five, and Florence, three, with partner Andy – was clearly uncomfortable and went into journalist mode when she spoke to him.

“Charlene has spent all of her career having to be completely impartial and serious but behind the scenes on Loose Women, the two of us love nothing more than trying to make the other women wet themselves laughing.”

Denise continued. “She’s so much fun but we’re not seeing that naughty, funny side of her, because I think she’s been placed in a situation that hasn’t allowed for that to happen.

“Matt Hancock being in there has completely stopped her from kicking back, relaxing and showing her true self. I can see it in her eyes – every time she laughs at something he’s said, she’s thinking, ‘Oh god, I don’t want people to think I’ve forgiven him.’ Tensions arose just four days into the show this year when Matt made his unexpected entrance. Within minutes, Charlene grilled the 44-year-old – who has been criticised for his handling of the pandemic and his part in the PPE supply scandal.

Referring to him breaking Covid rules when he was caught cheating on his then wife Martha with aide Gina Coladangelo, she asked, “Why did you do it? Why are you here?”

The days that followed saw Matt tell his campmates, “What I’m really looking for is a bit of forgiveness” – after which Charlene gave him a hug.

“I absolutely wanted everyone in that jungle to hold him to account for what he’s done,” Denise said. “But I have to empathise with them.”

Days later, newly-appointed camp leader Matt selected Charlene as his deputy and RV roommate. However, she was quick to opt out of the sleeping arrangement.

Denise said, “When you’re in such a strange environment, with limited contact with the public, it’s easy to feel very lonely and isolated, so you’re forced to simply get on with the people who are sharing this environment. It’s the only way to make the situation liveable.

“Above anything, knowing you’re under the watchful eye of those at home, you definitely don’t want to be in the middle of conflict because you can’t know how it’s going to be interpreted on the outside.

“I feel sorry for Charlene and the other campmates because I don’t think they want to be around Matt Hancock. They despise what he did. But they don’t want to be seen by the public as forming a gang against him.