For a product initially positioned as a “closet mate” which could help improve a woman’s marital prospects, HUL Chairman Sanjiv Mehta says the communication now is all about women’s empowerment.
Viveat Susan Pinto reports.

What’s in a name? A lot, if it is Fair & Lovely, Hindustan Unilever’s skin-lightening brand which created an entire market out of its fairness proposition for over four decades in India.

HUL has set the process in motion, applying to the Controller General of Patent Design and Trademark to get the name ‘Glow & Lovely’ registered, industry sources said.

An HUL spokesperson, when contacted, said the company would not be able to confirm the new name.

“Trademark protection is an important aspect for any brand and in this case, we had applied for several trademarks in 2018. Some of them have received registration, while some applications are pending. We may choose to register other brand names too,” the spokesperson said.

Brand experts concur with the view, saying HUL could consider other options such as ‘Care & Lovely’ as a substitute for Fair & Lovely.

“The change being initiated by HUL is at the marketing level. The formulation of the product remains intact, implying that the fairness attribute will not vanish. But HUL, at the same time, will no longer use fairness openly,” says N Chandramouli, chief executive officer of Mumbai-based advisory firm TRA Research, which comes out with the annual Brand Trust Report.

“Yes, there could be a short-term impact in terms of market share. But a holistic view of beauty can also lend itself a presence to many more categories, which fairness could not have. That is something that HUL could be considering,” he said.

HUL’s Chairman and Managing Director Sanjiv Mehta says a shift in strategy with regard to Fair & Lovely was initiated a few years ago.

From a fairness cream, HUL has been pushing Fair & Lovely as a skincare brand, focussing on ‘radiance’ and ‘skin clarity’ since early 2019.

It will now formalise this process, as Mehta adds, breaking away from its “narrow definition of beauty”, even though some experts say Fair & Lovely has been compelled to do this, following the ‘Black Lives Matter’ global movement. 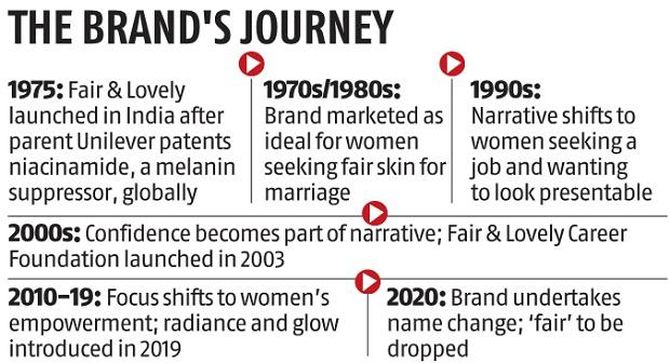 “BlackLivesMatter is a movement that is alive in the West. In India, the criticism against fairness creams has been on for years. So what’s changed? I think global majors have been forced to react with protests around products promoting gender discrimination simply growing. It was becoming untenable for them to promote purpose-led advertising when the name of a brand promotes colourism,” says Santosh Desai, MD and chief executive officer, Futurebrands India.

For a product initially positioned as a “closet mate” which could help improve a woman’s marital prospects, HUL Chairman Mehta says the communication now is all about women’s empowerment.

“The advertising narrative has shifted from the coy bride (of the 1970s and 1980s) to the confident young wedding planner in commercials today who has no qualms of looking and feeling good, even as she goes about organising the weddings of others,” says Mehta.

The packaging has also reflected the change, with the cameo of two faces as well as the shade guides on the back of the pack making way for an “inclusive” measure of healthy skin, Mehta adds.

“There is room for the brand to move into the larger grooming space,” says Harish Bijoor, chief executive officer, Harish Bijoor Consults.

“HUL has taken the first few steps by getting into soaps last year, this could be extended into lotions, moisturisers, skin cleansers, even as the latent attribute of healthy, glowing skin remains.”