After a delay due to Coronavirus, Bigg Boss 14 finally started on October 3, with a grand premiere. It was a night to remember. Apart from the contestants’ introduction, eyes were also on their outfits and also on what Toofani Seniors wore. Hina Khan and Gauahar Khan wore stunning gowns. We had asked fans to vote which one they liked more. Hina was the clear winner. She got 63% votes while Gauahar got 37%. Have a look at the results below: 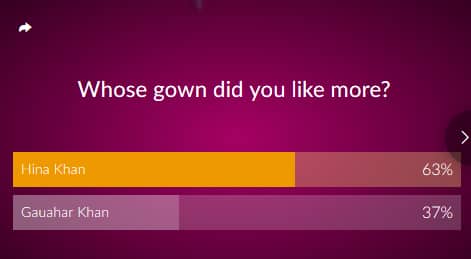 Hina wore a creation from Swapnil Shinde for the premiere night. Her gown was a shade of midnight blue with lot of gold. It was teamed with jewels from Azotique and Antarez Jewels. She wore it with heels. Gothic makeup added more drama to the look.

On the other hand, Gauahar wore a stunning gown from Steven Khalil. The gown is in a shade of blue with gold stripes done on it. The designer operates out of Australia and is known for his gowns. She wore her hair in waves with a bright red lip.

Following Shehnaaz’s footsteps, Hina is often seen giving Sidharth a powerful champi, which seems to be the energy booster to keep him going on with his game.

Winds improve air quality, mercury set to fall in Noida, Ghaziabad
We and our partners use cookies on this site to improve our service, perform analytics, personalize advertising, measure advertising performance, and remember website preferences.Ok