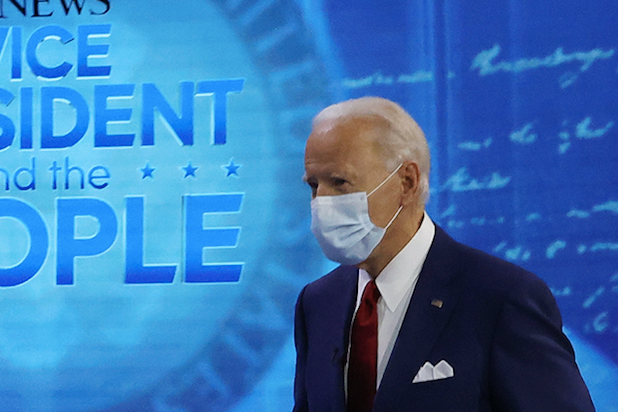 While Trump’s town hall was notable for the moments like his refusal to distance himself from the extreme right wing conspiracy theory QAnon, Biden’s exchange with ABC News’ George Stephanopoulos was a more relaxed affair focused on policy specifics. Biden at times provided lengthy, detailed answers on topics ranging from the constitution to racial injustice, often asking “Did I answer your question?” after, which of course then got a fair amount of joking play on Twitter.

He generally presented himself as the opposite of Trump, providing few one liners, avoiding insults, encouraging mask use, defending science and promising to change the law to defend the rights of transgender people.

Here are four moments that made a splash.

At one point, Biden discussed how he would enforce a potential mask mandate to slow the spread of COVID-19. He brought up Trump, who made fun of the former vice president for wearing a mask and was later hospitalized for COVID-19 himself.

“The words of a president matter — no matter whether they’re good, bad or indifferent, they matter — and when a president doesn’t wear a mask or makes fun of folks like me when I was wearing a mask for a long time, then people say, ‘Well, it mustn’t be that important,’” he said.

2. To protect LGBTQ individuals, Biden said, we must “change the law.”

Biden answered a question from the mother of a transgender child, telling her he would “change the law” to be sure her child never faced discrimination that was given a legal pass.

Masks weren’t the only coronavirus-related measure brought up at the town hall. Biden said that yes, he would take a COVID-19 vaccine.

Not only would he take it, he said, but if a vaccine were tested and backed by scientists, he’d “encourage people to take it,” too.

“Defund the police” became an often-repeated refrain this summer as unrest over systemic racism came to a head across the country. Biden said on Thursday, “We shouldn’t be defunding cops. We should be mandating the things that we should be doing within police departments and make sure there’s total transparency.”